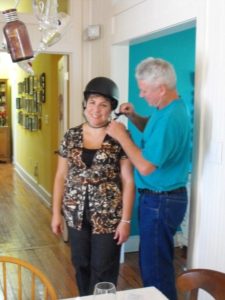 As a result, we differ greatly on the subject of motorcycles.  I don’t see the appeal.  When I see a motorcycle, I think of broken femurs and peeled off skin. I hear ambulance sirens and shrieks of pain. Mike thinks of freedom and flying and hears in his head, “VROOOOOOOOOOOOMMMMMMMMMM!”

He wants a motorcycle. I don’t want him to have one. I pay his life insurance bill every year just in case he gets one.  They’re impractical things, I say. They’re gas-efficient transportation, yeah, maybe, only without a place to put my purse and a much higher chance to get bugs in my teeth.

Then came Thanksgiving a few years ago. We went to Mike’s sister’s house. She and her husband were motorcycle-sitting for a friend, and there was a rather impressive looking Harley Davison sitting in the garage.  Mike spent a while looking at it, giving me long, drawn out reasons why he would prefer a “crotch rocket” to a Harley.  There were lots of sound effects.  Harleys, apparently, are muscle machines designed to make you aware of their presence.  They go “blumblumblumblum.” The sleeker, more need-for-speed models have a higher, whinier, “neeeeeooooooooooooowwwwwwwwwwwwwww,” complete with Doppler effect.

But, as they say, beggars can’t be choosers, and here was a Harley to ride, not a crotch rocket.  To make it ‘better’ (this word is seriously debatable) we were in South Carolina.  The laws of physics had not yet been passed in South Carolina, and so helmets were optional.  Mike bounced up and down on the balls of his feet, clapping his hands like a kid on Christmas, absolutely sure his Red Ryder BB Gun was going to be under the tree.  “I’ve always wanted to ride without a helmet!”

I thought I said, “I’ve always wanted a husband who didn’t have traumatic brain injury.”  Apparently between the time that the words left my mouth and the time that they reached his ear, the South Carolinian air had twisted them to, “Go right ahead, honey, and be sure to try to break the sound barrier!”  And he was off.

He came back, exhilarated and miraculously intact.

He loves me, I think, and so wanted me to feel as pumped up as he was.  He begged me to get on the back of the motorcycle with him.

Here’s the thing. I am now and was then over 40. There were certain things I had never done in my life, and never felt the need to do.  I’ve never smoked a cigarette.  I’ve never done illegal drugs, not even the more socially acceptable ones like marijuana.  (If you are thinking this means I was an uptight, boring teenager, well, then, facts are facts.)  It has become a matter of pride for me, now. I’m tempted from time to time, more out of curiosity than anything else, like the time at the Georgia Bar Meeting where they had guys actually rolling cigars at long tables and then handing them out.  But, I figure, I’ve gone this long, why start now.  What if I like it?

And so, because of, or despite the several glasses of pinot grigio I had to accompany Thanksgiving Dinner, I agreed, but only if I could wear a helmet.  A search was on, and finally one was scrounged up. It looked like a WWII relic, like maybe the Nazi iron cross had snapped off of the top.  It felt spongy and weak, like it was more likely to crack and stab me in the head than protect me in case of a crash.  But I clung to it like a buoy in the middle of the ocean, believing it would keep me safe from the predatory road.

We went downstairs and got on the motorcycle, my arms circling my husband’s belly.  There was so much to think about. Which way to lean? How do I make sure that my legs stay away from all the hot pipes? What happens if we run over a stick in the road? Like a bicycle, will it send us tumbling into a ditch?

I insisted we go slowly, and we did.  Although it felt like a million miles an hour, I know it was probably more like 25 or 30.  I didn’t know where to look. Straight ahead was a view of my husband’s t-shirt, billowing in the wind.  To the side were trees and houses, all going by so quickly.  I looked down.  The speckles in the asphalt were flowing by, just inches from my feet.  I had visions of my foot slipping off of the bar it rested on, and being torn off by the road. Each rough pebble of asphalt scraped off my skin in my imagination as I was dragged along by momentum.  Road rash, I’ve heard it called, minimizing it into something that diaper cream could cure in a day or so instead of being flayed by the friction of the road and having my innards exposed like a burn victim.

I think I made it all the way around the block before I made Mike stop and let me get off.

I get why people like it.  I do.  I really do.  I’ve been on the Jet Ski at the lake, feeling the sun on my face and the wind in my hair, flying across the smooth water, feeling nothing but freedom and joy.  I would imagine that’s what motorcycle aficionados feel.  But I’m not scared of water.  I’ve rolled the Jet Ski a time or two, taking a turn too tightly over a wave, and the end result was I got wet, and maybe got a little water up my nose.  I didn’t eat the back of a tractor trailer or get thrown off into traffic.  I didn’t even skin my knee.  The water is a safety net for me in the way that a crappy, old-school helmet is not.

I’m a cheap date, I guess.  Just like I only need one or two glasses of wine to make me completely relaxed and happy, I only need a tiny dose of adrenaline to feel excited.

But I pay my own life insurance premiums, just in case.

The Whine of the Motorcycle Rider

The Whine of the Motorcycle Rider