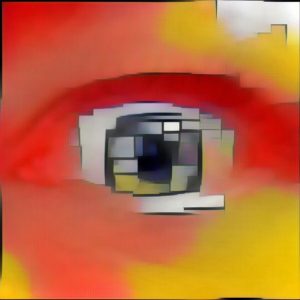 If you’ve read my books (and I’ll pause here while you go order them off of Amazon or the online retailer of your choice if you haven’t) you’ll know that I have a pretty lengthy history with eyeball surgery.  As a person too blind for lasik, I got implanted contact lenses which involved slicing open my eyeball and shoving a permanent contact lens in there.  Then I got a cataract in my left eye, and had to have the permanent contact lens removed, along with the lens I was born with, and replaced with a lens that looks more or less like a hat a member of the band Devo would wear while whipping things, whipping them good.  This resulted in eyeball stitches placed oh so delicately two days before I coughed my head off from pneumonia.  But really, read my books for the whole story(ies.)  I’ll wait.*

The cataract lens worked for a few years, but then I started getting bleary.  From the inside, it looked like a movie camera trained on a 1940’s starlet, smeared with Vaseline for romantic effect.  So, back to the eye doctor I went.

I was told that my situation was not uncommon.  There is a membrane that lives behind where the cataract lens was placed, and sometimes that membrane didn’t like the cataract lens, and you get deposits, or, as my grandmother would say, because many times Yiddish says things better, “schmutz,” on the membrane, clouding one’s vision.

No biggie, I was told.  We just zap them with a laser.

No biggie to YOU, I thought.  See, having my eyeballs zapped with a laser is something I’ve had done before.  Back before I had my implanted contact lenses put in, I have to have holes zapped in my irises to avoid the buildup of pressure.  The answer is yes, that is approximately twice as uncomfortable as it sounds.  Maybe three times.  Maybe seven.**

But I survived it, and I’d survive this.  This one was easier, I was told.  I didn’t even need someone to drive me.  Mmmmmmmhmmmmmmm.

At the appointed time, I went to the surgical center, where the laser was located, and got only one eye dilated as big as a dinner plate.***  My pupil was so large, I was afraid to look down lest my brain slip out of the opening.

Eventually I got called back, and I sat in a chair opposite the kind of head and chin strap contraption that only eye doctors, Nazi scientists, and dominatrixes**** would ask you to put your head in.  The doctor sat on the other side in what looked like one of those pre-virtual reality video game consoles where the chair swings along with your fake laser gun when you move.  Only this wasn’t a fake laser gun.  And he was aiming it at my poor eyeball.

“Pew!  Pew!” said the laser gun, as it zapped away the gunk from the back of my eye.  I heard and felt a crackle with each shot, not exactly painful, just odd and unpleasant.  “Pew!  Pew!  Pew!” said my eye doctor, clearly having too much fun.  “Ah!  That one almost got away!  Pew!  Pew!”

I began to hum the theme song to Super Mario Brothers, the only video game theme song I could conjure up under the circumstances*****.

And that was it.  I was given a pat on the head and sent on my way.  I prayed hard I wouldn’t get pulled over, since it would be hard to explain my oddly uneven pupils without the assumption of methamphetamines or maybe some off brand LSD getting in the way.

But guess what?  I can see now.  Through both eyes.  Thanks, doc, for beating the boss level monster with your special laser gun!

*** There’s an ‘effaced and dilated’ childbirth joke in here somewhere, but it’s probably too graphic for a family blog.

If you enjoyed this and want Lori to write for you, click on her Expert Ghost Writer page.  To read more like this, visit Lori  on Twitter, or on Facebook. For the Best of Lori, read her books, “Mismatched Shoes and Upside Down Pizza,”  “The Armadillo, the Pickaxe, and the Laundry Basket,” and her latest release, “You Know I Love You Because You’re Still Alive.”