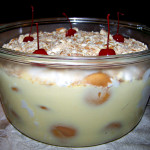 I love the way my friend Diane says the word “pudding.”  She says “PUHHHHHHHHH-din,” with the “puh” drawn out for three whole seconds and the “din” just a little flip of the back of the throat, almost not even there.  I ate some pudding today, and I asked her to say the word before I ate it.  She obliged.  And then told me there was really no other way to say it.

“For you,” I said.  “But you speak southern.  Imagine if I said ‘For Thanksgiving we had turkey and carrots and mashed potatoes and broccoli and PUHHHHHHHHHdin.’  It would sound ridiculous.”

She said, “I would never say that.  I’d say, ‘We had turkey an’ dressin’ and PUHHHHHHdin for dessert.’”

Which lead to a “dressing” vs. “stuffing” conversation.  I say stuffing, because you stuff the stuff inside the turkey.  Dressing would imply that it went on top of the turkey, which it doesn’t.  Still, you can’t argue with words your Mama taught you.

I go to the movies.  Diane goes to the THEEayter.

I don’t really speak with any accent.  My upbringing was in three different states in the south and southwest in the learning to speak years, and the north during the formative years, and then college and law school at schools with large Yankee populations in the south, all with stereotypical Yankee parents.  I sort of speak television neutral, but I may get more Southern or Yankee depending upon who I am talking to.

I LOVE regional accents.  I wish I had one.

Diane, who starts to get itchy when she gets more than 15 miles from home, is one of my favorite accented people, and one of my favorite games is comparing how we say things.  She thinks “Merry, marry, and Mary” are all pronounced identically.  I think they are three different words.  Likewise, she says “pin” and “pen” the same (peeeeeyun).  And “still” and “steel.”  Often, I have to ask her to clarify.

It is fun to watch Diane and my Mom have a conversation.  Between my mother’s thick Brooklynese (and increasing deafness) and Diane’s drawl it is rather entertaining.  I find myself switching accents like languages and translating.

My Mom, unlike Diane, says her g’s but will often drop her r’s.  Never fear – there is a law of conservation of r’s.  For every “r” that falls off of “water” (wah-tuh) it is added to “banana” (buhNAHnner.)  Once, when I was in college, I had been sick, and told my mother that my cough was better.  “What?” she said.  I repeated myself.  She repeated her what.  Then I realized the problem.  I said, “My CAWF is bettah!” and she said, “Oh, good.”

What’s your favorite misunderstanding based on a regional accent?  Tell me in the comments below.