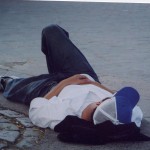 A friend of mine who knows me rather well sent me a link to a product called the Ostrich Pillow. Seriously: look at this: Studio Banana Things The Original Authentic Ostrich Pillow. I haven’t bought it yet because it is a little pricey, but it is only a matter of time before I break down and do it.  Because I fantasize about a good nap the way other women fantasize about Channing Tatum or chocolate.  Or Channing Tatum covered in chocolate.

The Ostrich bills itself as a pillow made for catnaps at work, not to mix my animal metaphors too badly. It looks sort of like an alien head. You put the whole thing on your desk, stick your head inside the body, and you tuck your hands into the holes above your head. It shuts out light and sound (but not, presumably, oxygen) and gives you cushioning and an answer to the ever present question when sleeping, “what am I supposed to do with my arms?” Arms always get in the way.

I’m self-employed, so I can’t be fired for napping at work. I don’t, usually, though I want to, often. When I was pregnant, the urge was irresistible, and I would lay my head on a sheep-shaped Beanie Baby and drift off until the phone rang and startled me into an immediate sitting position. Sometimes someone would knock on my office door, and I’d be forced to pick drool crust off of the side of my face and pray my hair was long enough to cover the woolly sheep marks on my cheek. I’m not pregnant any more, but the urge to nap hits me sometimes around 3pm with the strength of a bag of hammers dropped from a ten story building.

I honestly think if we adapted the oh-so-civilized custom of the siesta we’d all be happier and more productive. The hours between 3 and 5 at work are rarely useful ones. 86.3% of my energy is spent on an inner monologue that sounds something like this: comeoncomeonstayawakejustgetthroughthisandyoucangohome

Thoughts like that make puzzling out complicated legal theory or handling complex negotiations impossible. I’m pretty sure that if I had an Ostrich and if I could get people to leave me alone for thirty of those last one hundred twenty minutes that the remaining ninety would be approximately eighty billion times more productive and get three times as much done in less time.

I mean, all kindergarteners do all day is play, and they get nap time. And yeah, yeah, play is their work, and they need more sleep for their growing bodies and all, but I’m pretty sure that I need more than five restless hours a night, too. Besides – you have to fight kindergarteners to lie down and be still and quiet during nap time. You wouldn’t have to ask me twice.

So why don’t I? It isn’t like my boss would get mad. I’m my own boss, and nothing stops me but my own compulsive need to conform to societal standards, which state, at a minimum, you should probably be awake during the work day.   Plus, I know from the few times I’ve tried that getting the phone to quit ringing and getting people to stop knocking on my door just to ask a ‘quick question’ is nearly impossible. I know this because when I was pumping breast milk in the privacy of my own office and put a sign on the door warning people away, they still knocked. I mean really. If the thought of accidentally seeing me half-undressed and strapped to a milking machine isn’t going to warn people off, a sign saying “nap time” isn’t going to do it.

So we have to change our culture, and embrace the wonderful melting pot that is America. Ideally, we take the best of everything our immigrants have to offer and synthesize it into something unique and our own. So let’s steal the siesta. In this case, let’s steal from Spain. From 3 to 3:30, let’s make it rude to make a phone call or seek out other people. If we are in a meeting, let’s take a break.