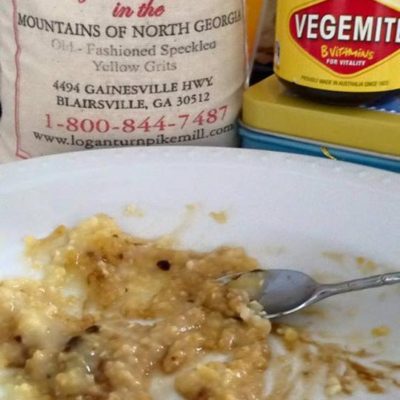 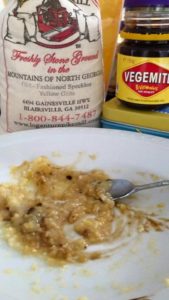 I have a friend named Alex, who is the mistress of www.alexchristopherwrites.com and the creator of “Visibility Coaching.”  Alex lives in Australia, which is about as far from my house in Loganville, GA as you can get and still be on planet Earth.  I met her on line, which sounds creepy, but it isn’t because it was for business reasons.  I’d never met her in person, but I knew what she looked like because of the wonders of the internet.

So, when Michelle Kulp had her Ocean Writing retreat in Annapolis and Alex was going, I figured I had very few excuses, and I went, too.  Alex promised to bring Australian food with her.  I promised to bring southern food.

Then I had to figure out what transportable southern food was, with a dash of “you probably don’t have this in the southern hemisphere.”  I went to the Stone Mountain Pecan Company for inspiration.  I walked out with butter toffee pecans, praline pecans (my favorite), peach butter, and, of course, grits.   I found pickled okra elsewhere.

Alex brought two tins of biscuits, these chocolate covered licorice things, “furry friends” chocolates, and chocolate caramels.  She also brought Vegemite, just like the six-foot-four guy full of muscles in Men at Work’s “Down Under.”

Those biscuits turned out to be cookies, but, since we called them biscuits, I felt perfectly justified eating them for breakfast.

I made grits.  Grits, in case you are reading this from north of the Mason-Dixon line, are corn.  Corn kernels are dried and ground, and then you boil them with water or milk and butter and salt and whatever else you want to put in them to make a kind of porridge.  They’re better than they sound from that description, and they are a southern breakfast staple.  You can also find them at dinner along with shrimp.  When I make grits at home, I make them savory.  I use bouillon instead of water, I add garlic and sharp cheddar cheese.  I like them with a lot of flavor.  This time, I made them plain, with just a dash of salt and cream.

Then we set about experimenting.  We added Swiss cheese.  We sprinkled them with sugar.  We added a spoonful of peach butter.

All good.  Grits are good no matter what you do.  They don’t have a whole lot of their own flavor, so if you add something yummy, they are going to taste like the yummy thing.  Grits are pretty much a vehicle for whatever yummy thing you put on them.

Suddenly, Alex had an inspiration.  She held out the little jar of Vegemite.  Vegemite, in case you didn’t know, is a yeast paste.  Australians are sold on the idea that it’s good for you because it might have a vitamin in it.  It’s thick and black and sticky, kind of like used motor oil, only saltier.  We took a small spoonful and mixed it with the grits.

And it was good.

We think we have a thing here.  Australian-American haute fusion cuisine.  We want credit.  We want our pictures on the packaging.

Unless you think it’s gross.  Then it’s all Alex’s fault.

If you enjoyed this and want to read more like it, visit Lori at her website, www.loriduffwrites.com , on Twitter, or on Facebook. For the Best of Lori, read her books, “Mismatched Shoes and Upside Down Pizza,” “The Armadillo, the Pickaxe, and the Laundry Basket,” and her latest release, “You Know I Love You Because You’re Still Alive.”