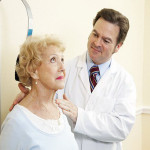 Because I am not the biggest fan of premature dying, I tend to go to the doctor rather often. My family’s health history is not exactly robust, with very few of us making it past our early 70s, and quite a few dipping out before then. Of course, the generations old enough to be in those categories all began smoking in their early teens and most of them took their last puff along with their last breath, so a lot of it may have something to do with that, but still. Heart disease, cancer, diabetes, crippling arthritis, and relatively harmless but very annoying tremors abound.

This morning, I went for my annual gynecological check up. A friend of mine’s daughter, who is half my age and otherwise extremely healthy and perfect in every way, recently had to have some disturbing cells removed from her nether regions, so I felt Righteous and On Top Of Things getting checked out while I had no symptoms.

My groinocologist (as my Dad would say) is a nice, friendly guy who was recommended to me by a friend. Recommended to me so highly, in fact, that I told her that according to the laws of the state of Georgia, being so satisfied with one’s doctor can be considered adultery in a court of law. (This is not true, in case you were wondering. When in doubt, do NOT take me seriously.)

Anyhoo, I got there, did my obligatory sit in the waiting room, and then was ushered back by a nurse, who made me stand on the scale. I hate this, because it reminds me of every Oreo I’ve eaten in times of trouble and every piece of birthday cake I ate with gusto because I felt like it was a sin to turn it down. I’m always tempted to take off my shoes and everything that is decent to take off in a hallway, but I never do. Because maybe I can convince myself later that I don’t really weigh that much, since my shoes weight twenty pounds each.

After officially registering as enormous on the scale (muscle weighs more than fat, right? And I’m very strong) I was taken into an exam room, where the doctor came in and talked to me about updates to my medical history, etc. He then handed me a gown and a paper sheet and told me to put the gown on with the opening in the front, and the sheet would drape over my waist. He then left the room so I could undress. Which is typical, but also fairly insane. I am paying him good money to manhandle my lady parts and make sure that none of them are diseased. I know good and well that in a few minutes he is not only going to touch me in intimate ways, but with a halogen light shining on all my glory so he can see the details. But he can’t watch me take off my pants?

I’ve given birth enough times with doctors and nurses and orderlies and cleaning staff and various and sundry other people in the room to be unable to count the number of people . Afterwards, naked and exhausted, I let a very insistent Jamaican woman touch my breasts in a thousand ways to try to teach me how to get my son to get some nourishment. While lunch was being delivered and people were coming to visit.

So I’m not very shy about my body anymore. I know that medical professionals are professionals and aren’t thinking, as my son would, “Boobies!” Instead, they’re thinking, “Oh, Lord, these things are enormous. It is going to take me for-freaking-ever to examine them thoroughly, and I was hoping to go to lunch sometime today.”   I’m just a patient in a long day of patients. My body is special to me and (I hope) to my husband, but everyone else on the planet could do without seeing more of it than is absolutely necessary. Why do I have to put on the silly robe thing that opens in the front just so you can open it and touch the parts it is allegedly covering? Why do I bother using this giant sized paper towel to cover my nakedness like a fig leaf when it is going to be thrown to the side and my feet put in stirrups in five minutes? I mean, I wouldn’t expose anything in the Kroger, but this is a doctor. Seems like a whole lot of false and wasted modesty to me.

Then there’s the chitchat. Like I said, my doctor is a very nice, personable guy, and we have similar backgrounds and views on the universe, at least as much as I can tell from talking to him through the gap in my knees as he does his job. There is nothing odd or awkward or, even, particularly special about the conversation: it could be had at any cocktail party or business networking event, except for where his hands are. If I think about it too much it feels weird. So I just separate my head from my body and let my mouth do the talking.

Which is probably a good thing. If some other part started talking, I’d need a doctor of another kind.

Going To The Doctor

Going To The Doctor