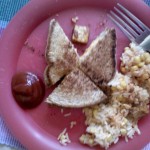 The other day, my daughter was sad for reasons only truly understood by another 12 year old girl.  It was a Saturday, one of the few days in which I had nothing in particular to do, and to celebrate planned on doing laundry and scrubbing the grout in the bathroom.

I raised my eyebrows in a way that I hoped communicated the fact that she was plenty old enough to make her own grilled cheese and I had my own things to do.

Then she did the puppy dog eyes.  Looking up through her lashes, she said, “And tomato soup.  It tastes better when you make it.”

I sighed a put-upon sigh and got to making the soup and sandwich.

Between dramatic noises, I gathered that the sadness came from her sudden realization that she was two thirds of the way through childhood.  Adulthood and all its attendant responsibilities were hurtling towards her on a collision path, like a drunk driving on the wrong side of the Interstate.

I popped “Ratatouille” in the DVD player, the first DVD I found in our collection that was both childlike and didn’t make me want to throw up.  We sat together on the sofa, eating our grilled cheese and tomato soup, and then snuggling in to watch the movie.  From somewhere a blanket appeared, and we huddled together under it, her head resting against my side and her fingers absent-mindedly playing with the hem of my sleeve.

When was the last time she did this?  It had to be years before.

As we watched the movie, my mind wandered, and I started thinking about all the things I needed to get done.  The dishes, the loads of laundry, the bills to be paid.  I didn’t have time to sit on the sofa and do nothing.  I started to feel the low level anxiety that is the background noise of my life: the constant pressure to always be moving forward, to meet responsibilities and get it all done before more piles up.

Marin announced her feet were cold, and she tucked them under my thigh for warmth.  There was no way I was ever going to move now.  My anxiety kicked up a notch, and my bladder reminded me of its capacity.  What should I do?  I may never be home three hours in a row again to wash and dry and fold a load of laundry all in one shot.  I was down to the underwear I’d be embarrassed to be in a car wreck wearing.  I was wearing a 15 year old nursing bra.

I did nothing.  I sat there, enjoying the company of the daughter who spends most of her days pulling as far away from me as she can, as is absolutely normal for a 12 year old girl.  I reached out to see if she would let me stroke her hair, and she did, just like when she was three and we’d watch Tom and Jerry Cartoons on the sofa together.   I was painfully aware that this might likely be the very last time we ever did anything like this together, and I did my best to record every single second in my memory banks.  I wasn’t going to let it slide by, even if it did mean that I had no clean clothes and a filthy kitchen.

Sometimes, doing nothing but eating grilled cheese is important.  Sometimes doing nothing is the biggest kind of something you can do.
Don’t miss anything! Sign up below for bi-weekly emails with exclusive content.