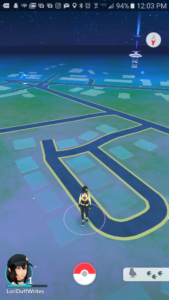 Because I am nothing if not a follower of the latest trends, I downloaded Pokemon Go to my phone.

For both of you out there who are even more behind the times than I am and who don’t know exactly what this Pokemon Go thing is, I will do my best, in my middle aged white lady way, to explain:  Pokemons are little cartoon critters, each of whom has a personality and powers.  They can get caught in Pokeballs, which look like what would happen if a cue ball and a fishing bobber had a baby.  Pokemon was a cartoon and a card game, though if it was a collectible card game based on a tv show, or a tv show based on a collectible card game, I couldn’t tell you.  I would look it up, but that would imply that I care.

Pokemon Go is an App for your phone in which you walk around like a moron staring at your phone until you find a Pokemon, at which point you fling a virtual Pokeball at it and catch it for purposes which are never clearly explained.

This is because I am not the target audience of the game.  I am of such advanced years that I used an actual typewriter in college and at one point in my life thought Pong was a seriously cool technological advance.  No, the target audience is young people without jobs, young people who don’t remember a life before smart phones, let alone cell phones at all.  Young people who look at my beloved IBM Selectric the way I might have looked at a Victrola.  These people are born with an innate ability to understand what to do with electronics without any instructions.  It is instinctual for them.  I blame it on all the Wi-Fi and satellite signals pinging around when they were in utero.

Pokemon Go is stupidly popular.  And controversial.  People are, so I’ve heard, wandering out into traffic to catch Pokemon.  Kids are actually getting up before noon in the summer, off the sofa, and walking somewhere.  So there’s good and there’s bad.

I downloaded it.  I chose some clothes for my avatar (that’s a cartoon version of me that acts as the ‘player’ in the game) and I was on a Pokemon hunt.  I stared at the screen, which just looked like the camera screen on my phone, until I found my prey.  I found a Pokemon in my daughter’s room.  At this stage in the game, I had no idea I was supposed to catch it in a Pokeball.  I saw the Pokemon.  I saw the Pokeball.  The relation between the two was a complete mystery to me.  I poked the Pokemon with my finger.  I poked the Pokeball.  Nothing really happened.  I poked at them some more.  I walked to another part of the house, and the Pokemon followed me.  I happen to have a tremor in my hands called “Essential Tremor.”  So when I poked at the Pokemon some more, the tremor made my finger slip across the screen, and I discovered that I could fling the Pokeball at the Pokemon.  Still, nothing really happened.

I went to my son, who is 14, and thus understands these things.  He was horrified and humiliated that I downloaded the App at all, and refused to help me.  My 12 year old daughter would only repeat the word “nope” and was no help either.

Eventually, I figured out all on my lonesome that you had to actually aim, and fling the Pokeball at a circle which magically appears at flinging time.  It was an Angry Birds like operation, and I caught my first Pokemon.

Then, suddenly, the screen looked like a stylized map with my avatar on it.  I walked around the house a little more, and nothing else happened, so I gave up.

The next day at work, I asked the hive mind that is Facebook what I was supposed to do next.  Someone told me to throw out an incense lure, which I would find by randomly poking things until I got to a screen with an incense lure on it.  I did this, and caught another Pokemon on the bookcase on my office.

Then I was told to go to a Pokestop, which is a place where you can go to get Pokecrap (my word, not theirs.)  What exactly Pokecrap is, and what you do with it, I’m not sure, but I was told to go to a Pokestop and ask one of the legions of 10 year olds who would be milling around the Pokestop staring at their phones.  I found the word “Pokestop” on my screen, and saw some blue triangles on my map thingie, and poked one of them.  It took me to what looked like a Google Earth image of a local sketchy no-tell-motel and told me that the Pokestop was too far for me to get to.  It made me wonder if Pokemon Go isn’t a lure that pedophiles use to get kids to congregate.

I also saw a structure on the screen that looked like a mini-Eiffel tower with a flame on top, and poked it.  It said it was a Pokegym, or something like that, but I had to get to Level Five before I had enough power to do battle there.

Looks like I’m not going to the Pokegym any more than I go to the real gym.  Ha ha.

I wandered around my office some more looking for Pokemon, and even ventured outside in the parking lot, but I didn’t go too far because I felt certain I looked like an idiot.

Judging from the number of articles and posts and references I’ve seen about Pokemon Go lately, I wouldn’t be the only idiot out there.

If you’ll excuse me, I’ve got to go. I’m going to play Poker with some friends with an actual deck of cards, for which there are findable rules in readily available places.  Ready, set, GO!