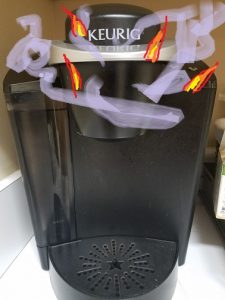 According to the fancy framed diplomas on my wall, I’m a pretty educated person. I’ve read a lot of books, written a lot of papers, and researched about a bazillion topics.

None of which prepared me for the coffee maker at my friend’s house. My friend, who I’ve known since the late 80s, graciously allowed my crazy family to stay at her house for 48 hours while we had Things to Do in the town in which she lived. She told us to make ourselves at home. She was a great hostess.

So, when the coffee pot ran dry, rather than ask her to stop what she was doing and make us more coffee, I took it upon myself to brew some more.

It’s coffee. I’ve been making pots of coffee for the better part of forty years. It isn’t hard. If you get coffee grounds in contact with hot water, you will have coffee of some sort. That’s really all there is to it. I’ve used all kinds of different coffee makers, drip brews, percolators, French presses, Keurig and Keurig imitations, espresso makers, and, when desperate, a saucepan. None of them tripped me up.

And so, fearlessly and recklessly, I ground the appropriate amount of beans in the grinder from the jar of beans next to the coffee maker, and pulled the carafe out of the machine in order to rinse it out and refill it with clean water. I brought it over to the sink, and twisted the little twisty part on the top. The little twisty part popped off, but there still wasn’t a hole in the top of the carafe. There was another little plastic part that was not budging. I pinched. I pulled, I twisted and pressed, grunted and cajoled, and nothing happened. I called my fourteen year old son over to see if I was missing the obvious. He couldn’t figure out how to open it either.

Eventually, I put the first little plastic part back on, and figured out that you had to push that down while twisting to ‘unlock’ something or another, and then the whole top came off. Ok then. I washed out the pot and filled it with water, ready for step two.

I went to pull out the basket where the coffee grounds went. The coffee maker, a slick looking shiny chrome model, had the basket in the regular place, but the drawer thingie that it sat in was aesthetically flush with the rest of the machine. This made it look very modern and hip, but no amount of my sticking my thumbnail between the cracks would make it pop out. I called my son over again. Eventually, he found a little chrome button on the side which popped it out.

The grounds put into place, the only thing left was to pour the water in the top. I pulled on the top of the coffee maker, and the plastic piece on top came out, revealing a round plastic piece, which also pulled off. There was something that looked like a drain at the bottom, so I poured the water in it. And, in so doing, poured water all over my foot, and the floor, and the cabinet. This was not where the water went, or, maybe it was, only I didn’t do the magic incantation that allowed its essence to flow into the part where it came in contact with the magic beans.  We could not figure out how to make it stop.  Finally, my daughter, with all 12 years of wisdom behind her, thought to put a cup underneath it to catch the water.  Duh.

A roll of paper towels later, we got the mess cleaned up, but then couldn’t figure out how to get the round part back on the top. As I stood there with a confused look on my face, my friend emerged from her shower, looking clean and well scrubbed and ready to face the day and the morons in her kitchen who couldn’t operate the coffee maker.

I’m not sure if this is a commentary on the over-complication of a simple job, or pointing out how useless a dean’s list certificate from a major university is when facing the tasks of daily living that actually matter. Or maybe it is just an ode to my old Corningware percolator with the three blue flowers on the side that anyone who could light a stove could operate because there aren’t any other options.

If you need me, I’ll be pondering this philosophical question at a coffee shop, where someone else can worry about where the water goes.