My son and I have a rule, which is that every time we go to a grocery store, we pick some kind of food we’ve never had before and we buy it. He always tries it. I only try it 85% of the time. For example, I did not try the tinned octopus. We’ve found some good stuff this way (lychee nuts), and we’ve also found some stuff we can’t believe anyone voluntarily puts into their mouths (this nasty Jamaican drink that was chunky and foamy and might just have been regurgitated.)

My daughter, whose diet consists mainly of mac ‘n’ cheese, chicken nuggets, and French fries, with the occasional nod towards apple slices and Swedish fish, rarely participates. However, one day not too long ago Marin and I were in the grocery store picking up specific ingredients for something or another, when a weird looking thing in the produce department stopped us in our tracks.

“What is that?” my daughter said.

I didn’t know. It could be a dragon egg, or maybe a spaceship. It was huge, maybe the size of the biggest watermelon you’ve ever seen, but more irregularly shaped, and it was bumpy. It was a mottled yellow/brown/green color. Marin reached out her hand to touch it and immediately drew it back. “It hurts!”
I looked at the label. It was a “Jackfruit.” I had never heard of such a thing. It was only 99 cents a pound. We tried to pick it up to get a better idea of it, but it was difficult. You had to hold it just so or the bumps on it dug into your hand. It was heavy. It required as much forearm as hand for lifting. We managed to get it up and out and over to the produce scale without dropping it or drawing blood. The thing weighed 21 pounds. So, even though it was only 99 cents a pound – which is cheap for apples – it would still cost over 20 bucks. For an unknown entity.
Marin developed an unnatural attachment to it.

The produce guy wandered by and asked us if we needed help. We asked him about the jackfruit, and he said it tasted like a sweet melon, kind of like a cross between a cantaloupe and a banana. He said it was very good.

In a weak moment, and mostly because I knew I’d get a blog post out of it and therefore could deduct the expense on my taxes, I bought it. We buckled it in the back seat to get it home, what with it being as large as a four year old.

When we got home, we searched on YouTube to figure out what we were supposed to do with it. We learned that if it isn’t ripe then the core and the rind can leak latex which will get all over your knife and your cutting 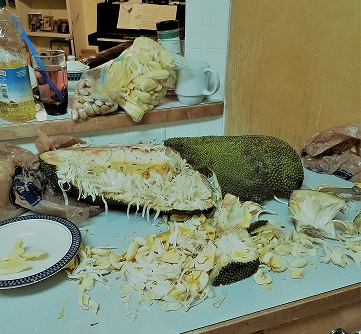 This carnage took us a whole hour to make

board and your hands. So you should wear gloves and oil your knife and cover your cutting board. Then you carve the thing in two halves. Inside are these yellowish soft pods. Each pod has a seed in it which is hard and kind of a pretty swirly brown. I learned you should save the seeds, and cook and eat them like chestnuts.
You have to dig your hand into the jackfruit to get the pods out, and then strip it of this fibrous material that, if you had the patience, you could probably weave into a pretty strong rope. You pop the seed out and eat the flesh.

It was good. A mild melony flavor, almost like eating flowers. And not anywhere near worth the colossal effort. It took my son and I* about an hour before we gave up, and we got about a gallon of fruit and a quart of seeds out of it.

My kitchen was a disaster. It took two days to get all the latex off the knife and I’m still finding little pieces of fiber on the kitchen floor.

There’s only so much jackfruit you can eat, so I looked up what you could do with it. I’m told you can cook it like pork – barbecue it or jerk it – and pretend like it is bbq. You can also cook it into a curry. We haven’t tried this yet. It remains in a plastic bag in our fridge, daring me to try something culinary with it.

Maybe I will, and maybe I won’t. I don’t have to tell you jack. Jackfruit, that is.

*My daughter gave up after about five minutes. I resisted the urge to pelt her with jackfruit seeds for her lack of dedication.