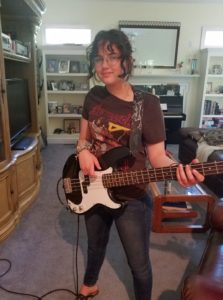 I have absolutely no idea how I birthed a girl who is so cool that, while she might have asked me what the homework was or to borrow a pencil in high school, she would never have given me ten seconds worth of thought outside of school.

My daughter is in a garage band, for crying out loud.  She went to a music festival and she went body surfing in a mosh pit until a security guard pulled her down and told her to quit it and go back to watching the concerts[1].   She can pull off red eye shadow and 30 year old AC/DC shirts she finds at Goodwill.  That kind of cool intimidates me, even in my own daughter.

All I can say is that I didn’t contribute any genes to screw that up.

And get this – she actually talks to me. I know she has secrets, and she doesn’t tell me everything.  She’s a teenager after all and I’m not an idiot.  But she gives me the tea[2] and only rolls her eyes at about 30% of what I say.

People often tell me that we look alike.  I find myself getting annoyed when people say that, because I feel like they are insulting her.  I’m a potato shaped middle aged woman with average-at-best looks, and she’s a slender, beautiful girl with style.  Her eyes are rounder than mine; her nose is an upturned button, whereas mine is a schnozz; and her mouth a rosebud, quite different from my fleshy, wide lips.  Her eyes are the color of the Caribbean, while mine are the color of olives.  Her hair is curly, and mine is straight.

I’ve spent an unreasonable amount of time wondering why this is.  She was, for nine months, essentially an internal organ of mine.  I’m not sure at all where she got this magnetic energy that makes her sparkle.  Had she drained every last bit of mine, she wouldn’t have half of what she has now.

She often accuses me of being too concerned with what other people think of me, mostly when I tell her that she can’t get her nose pierced because it will make people think she’s rebellious and never hire her.  Maybe it’s true that I give other people’s opinions too much thought, but I counter with the fact that my entire career is based on people thinking well of me.  You don’t get to climb traditional ladders otherwise.

Of course, I’ve also learned that perhaps traditional ladders are tough to climb.  The sad truth is that who you know is more important than what you know.  You can have all the skills and knowledge in the world, but if you don’t know someone who can help you get our foot in the door, your foot will probably stay out on the stoop.

My daughter?  Well, there will be doormen making sure the doors are wide open for her.  If I’m lucky, I can trail behind her and get in before the doors shut on us.

[1] My husband was there with her, which I guess tamps down the cool factor, but still.

[2] This is apparently what the cool kids call ‘gossip.’

Hangin’ with the Cool Kids

Hangin’ with the Cool Kids