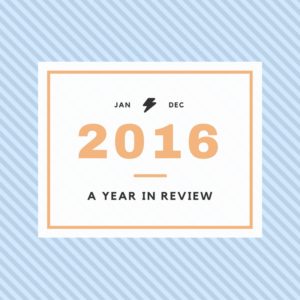 2016.  What a year, huh?  Judging from a random sampling of my Facebook friends, most folks seem to think that it is in the record book as one of the more seriously horrible years that have ever occurred.  The red carpet has been laid out in front of the Pearly Gates, and it is quite the star studded affair.  Politics ripped apart families and friendships.  Perfectly rational and otherwise kind people devolved into a swirling maelstrom of insults, low blows, and hurled mud.

But.  That isn’t to say that blessings didn’t occur amid the crazy.  Like a tree growing in Brooklyn or a rainbow after a devastating storm, good things are there if you know where to look.  So I’m looking.  Here’s my Year in Review: my top ten list of things I’m grateful for that happened in 2016, written in no particular order other than the order in which they occurred to me.

1.       My son got his learner’s permit and didn’t kill anyone.  Yet.  Actually, he’s turned out to be a pretty good, if overly cautious, driver.  Sometimes I even unclench when I’m sitting in the passenger’s seat.

2.       Thanks to the wonders of modern medicine and the targeted poison that is chemotherapy, my father’s colon cancer is merely a pain in the butt (ha ha) as opposed to something that threatens to take him from me.

3.       I went to the Erma Bombeck Writer’s Workshop in the spring, which not only introduced me to my tribe of writers, but, by welcoming me in their midst, allowed me to think of myself as a writer as much as I think of myself as a lawyer.  There’s funny out there in everything and it needs to be shown to the world.  There’s too much darkness out there without the light of humor.

4.       My daughter had an amazing epiphany all on her own – she came to me, stunned, with this comment, “Mom, you know what?  If I actually practice my flute, I get better.”  And get better she does – second chair in District Honor Band, and she’s only in 7th grade.  You go girl!

5.       When the chips are not just down but stomped into the ground, my friends are actually there for me.  What good people I have surrounded myself with.

6.       If I had a dollar for every time I belly laughed this year, I’d be a rich woman.  Actually, now that I think of it, just having all those belly laughs makes me rich.

7.       I learned how to use Twitter in such a way that larger than life people I admire (all of whom are writers, and who, since they are writers, are probably actually really socially awkward and introverted people who sit in their living rooms basking in the glow of a laptop screen) have actually responded to some things I’ve said, making me float on a cloud of glory for a few hours each time.

8.       I made peace with my eyebrows — thick, long, dense things that threaten to take over the entire top half of my head if unchecked.

9.       Both of my children, at times, will talk to me like I am an actual human being, and not some soulless creature who exists entirely for the sole purpose of making their lives difficult.  At times, I get glimmers of hope that they might actually like me.

10.   My pantry overfloweth in such a way as to make me, as my daughter diplomatically puts it, “thick.”  I’ve got clean drinking water from no less than five sources INSIDE MY HOUSE and multiple toilets that actually flush nearly every time you ask them to.  What a life!

So, yeah, 2016.  You can kiss my white, creamy grits on many levels.  But beware – I might just have reasons to kiss you back.